So let’s get straight into the action to make breadboard Ben. I use the following components: an arduino nano 2 photo resistors and two 10k ohm resistors to continuous rotation. Servos, some acrylic, a caster wheel to model aeroplane, wheels a breadboard, some breadboard jumper cables and some batteries, one for the Arduino and one for the servos. Now the first thing I needed to do was work out exactly how all the components on breadboard Ben were going to be placed. So you can see now that I’m actually lining up the servos and the breadboard against the acrylic plate and seeing just about how wide it is and how thick sorry how wide I need to cut the acrylic. So once I’ve got the approximate size for that. I just get the ruler and Mark a straight line, so I can cut it out on this little electric saw. I have so that’s about the rough idea of how I want to have it so I’m, not sure what this tool is called, as I inherited it from my grandfather, but it’s really good for cutting acrylic and other thin material like that. So all I have to do is just cut out the bit of acrylic, that I’m going to use for the body and then I’m going to give it a light sand on the rotary sander. So, just to make sure that the cut was nice and straight so I’m, just using the guide there to make sure it’s at perpendicular going like that, then once I think it’s straight enough, I’ll start rounding off the corners now that’s, because this robots actually going to Be used to help teach kids robotics at high school and that I teach so I’m actually just rounding off all the corners just to reduce the amount of possible injuries they can occur.

So, as you can see, they just burring off the edges, making it nice and smooth once that’s done I’m, just making sure that everything fits nicely there. The wheels that I’m going to be using they’re, actually model aeroplane, wheels and I’ve screwed on the servo horn attachments. So they’re just really nice, nice and spongy. So just pull the pull the protective coating off of the acrylic on both sides. You can see it’s, really nice yellowy color. The protective coating is just on there to stop the acrylic from getting scratched and things like that. But we don’t need that anymore. Now. It’S, which has what I’m using to attach everything to the actual body, is double sided phone tape, it’s very sticky, it’s, a kind of like a temporary fix it’s, not as permanent as hot glue and it’s. Just quick and easy to put things together and I’m doing one this really to be an absolute permanent robot build but it’s strong enough to stay together. But if I do want to pull it apart, it will come apart. So I’ve just joined the two servers together and then I tape them onto the acrylic, like that. Those do the wheels to make sure that there was enough clearance and now I’m just pushing it firmly to make sure that that tape is holding it onto the acrylic body. Now this is that that’s, the cost of all I’m going to be using. So again, the same process just get the double sided phone tape put it on to the cast over the top press.

It down firmly just peel off the layer there to reveal the C key stuff and then just press it onto the acrylic plate. So I just have to make sure that everything is right: height, press it, nice and firmly just double check to make sure it’s going to stay on there and it seems to be working really well, it’s, a good height good, build. You know it’s a bit of a cleanup there now I’m, actually going to attach the breadboard to the body using a Velcro, sticky, velcro things so just put two little velcro tabs on the robot body and then two velcro tabs on the actual breadboard and that’s. So that they can actually pull the breadboard off if they want to work on the circuitry and then once they’ve done, they can just stick it back on there’s no need for it’s, not permanent, there’s, no need for undoing screws or anything else like that. It’S really quick and easy, and you can see there that’s, basically what the robot is going to look like there. So I just have to press firmly just make sure that the velcro – and that is the velcro – is less strong than the double sided foam tape. So once that’s all done, I grab the Arduino Nano place that into the breadboard and that’s just that’s. What the brain were going to be using for this build so it’s really good on the breadboard. It just fits in nice and just fit.

Has a nice form factor compared to the r20? You know with a breadboard and I’m using this breadboard just to give them a lot of space to do things like whatever they want to. So I just stuck a 4.8 volt rechargeable battery pack on the bottom there and that’s going to be used to power the servos. Now now, what I’m going to do is actually hook up the light circuit, so you can see I’ve got two photo resistors and two 10 10k ohm resistors, and basically, what this is doing is if you watch one of my previous video is called the analog input Tutorial on lights, winner, you’ll see that I’m actually effectively creating a voltage divider, which output the output output voltage depends on the amount of light. So using these photo resistors in line with these resistors will give you a value of 0 to 5 volts, and you can hook these straight up to the analog pins on the Arduino and get a reading of 0 to 100 to 3 and we’ll use this valley. To determine which area is either brighter or darker and the robot can react accordingly, so I’m, just tying all of the 5 volt and ground together and then connecting them to the fire bottom ground on the Arduino. I actually ran out of power switches so I’m, just using a 9 volt battery with some breadboard jumper cables and I’m. Just gon na push that into the voltage in pin on the Arduino, so I’m, just typing up some code now I’m, only going through it very quickly as I’ve covered most of this in my tutorials, but I thought I’d show you just to give you an idea Of how I would code and how I do things together, you know I’m, not a professional I’ll.

Do it my own way, it’s, definitely not to professional standards, but this is just the way I do things I use voice for movement, because then I can easily change them and if I am using lots of movement actions inside the main code, I don’t have to Go through and change them all, so that makes a lot a lot easier as well and again, if you want to change this code, it’s much easier for you to as well, and I also include the light, follow and light avoid movement options in there and you Can comment out either one or the other to get it to do whatever you want it to do so now, I’m, just connecting the servers up to the actual breadboard here so I’m, eight and nine for the left and right and then what you’ll want to do Is to connect them to a separate kind of ground and voltage supply rail then connect the batteries voltage out to the voltage in on the servos and the ground to the ground and then the ground of each of these to the ground on the Arduino. So once I have uploaded the test code, I’m, just kind of wire in everything properly again and you’ll – see that I’ve actually got my phone’s flashlight and it’s using the light avoid, and that was just a test to make sure that everything was working properly. So, after a cold beverage and some more testing, I found the wheels kept coming off.

So to fix this, I actually took off the servo horns and placed a screw between the servo horn in the wheel, so the screw head was got other, so the screw thread was coming out, the other end and that’s so that it can be threaded into the Actual shaft on the actual servo and that’s to hold the wheel on properly there. So you can see that right there and that will is not going to come off anymore, so it’s, a nice firm, snug fit and once you’ve done that just do it to the other one as well. It’S the same process just push it through screw it back. On then place it onto the servo shaft pen screw it on, like that, you can see that it has got a nice shape to what Eric and it looks quite good. I, like the yellow so once that’s all done and start the testing again. So you can see here I got my phone again and I plug in the voltage out of the battery into the voltage in of the Arduino Nano and now it’s doing the same routine before the light avoid routine and it just continuously move away from my phone. Now all I’ve done now is just uploaded. The light follow code, I’m, actually I’ve actually turned the lights off in my room and the light that you see is actually coming from the flashlight on my phone and you’ll see it moving around that or wherever I move.

The phone it will move towards the phone because that’s, where the source of light is coming from and just swap pans there move around and you can see it works quite well, and thanks to that difference variable. It means that it also moves a lot straighter in some areas as well and it’s, not always joking around. So I thought it worked quite well and I can’t wait to give it to the heads of the kids and let them build it themselves and see how they go with it.


RT @arduino: The Ifs are a family of blocks that teach kids 3 and up how to code: https://t.co/USbazw7kYW https://t.co/0EmqGrqtO1 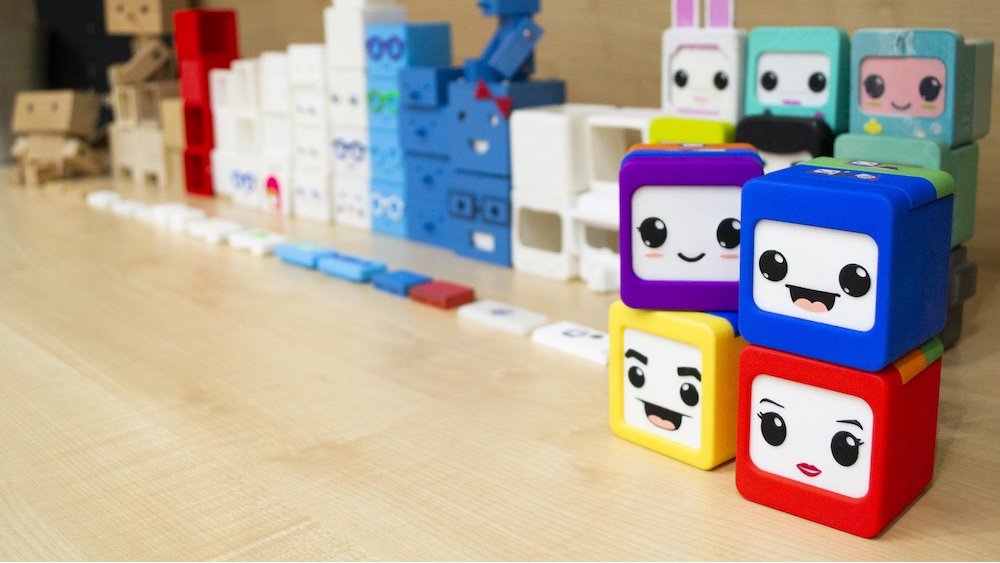 
RT @playtheifs: Do you know that The Ifs are Arduino compatible? Read more ⬇️⬇️
Thank you @arduino to write about The Ifs!! 😍😍 @dcuartiel…