Now the last step is connecting one outside end of the potentiometer to ground and the other side of the potentiometer to the positive rail and then, of course, connect the rails of your breadboard over to the ground and five volt pins of the Arduino and your LCD. You should line up like that we’re just getting a bunch of gibberish right now, because we don’t have any code uploaded to the board, but you can see that adjusting the potentiometer adjust the contrast. You can also replace that 220 ohm resistor with a potentiometer and that’ll adjust the brightness of the backlight, now we’re, ready to upload some code to the Arduino and see what we can do with this LCD. I have programs posted on my blog with examples of each of these liquid crystal functions so I’m, going to just copy and paste from there to show you what these functions do. Let’S start out with a super basic hello world program. Just so, you see what’s needed just to print text to the LCD I’m going to copy it and paste it into the Arduino IDE and on your LCD screen. You should see something like this hello world. Alright let’s try something a little more interesting like the LCD, clear function. We can use this function to flash text on and off on the screen. It uses the LCD print function, along with the delay and LCD you’ve got clear function, so I’ll go ahead and copy and paste this into the IDE.

So we’ve got LCD print and then a 500 millisecond delay then LCD, clear and then another 500 millisecond delay and then it loops off back to the beginning. So once I upload this to the board, you can see, we have hello world flashing on and off, at a rate of 500 milliseconds, keep in mind, the columnar coordinates start from zero. So across the top row we have 0 to 15 columns and from top to bottom, we have 0 to 1 rows and by default the cursor is set at position: 0 0, which is the first column of the first row to demonstrate this let’s replace the first Three letters of our hello world text with X’s, so you can see here we have our LCD home function, which places the cursor at the upper left hand corner of the screen and overwrites any text that was previously printed to it. So we have our LCD print. Hello world in the void setup section that runs first before the program continues on to the loop section, which runs continuously over and over again. So if we have another LCD print function in the loop section, it’s going to overwrite, whatever we have in the setup section so now you can see that the first three letters of hello world are replaced with X’s and that’s because we set the cursor at the Home position, so text is going to print, starting at whatever location you set the cursor and in the next example, we’ll set the position of the cursor with the LCD dot set cursor function, so we can set it anywhere.

We want on the screen. In this example, we’ll move it to position 2, 1, so that’s on the bottom row and 3 character positions to the right from the left side. So the void set up. We have our LCD begin, our set cursor. We set our cursor in the setup section and we print from that cursor position: 2, comma 1, and so our hello world is moved down so it’s printed now from the second row and three character positions over to the right and there’s other functions. I’Ve got up on the blog post, but I’m not really going to go into them here and we’ve already talked about the LCD print function. Now the LCD cursor function creates a blinking underlined cursor at whichever position we specify so let’s copy that code and paste it over to the IDE. Now there’s two functions here: LCD cursor, which turns the cursor on and LCD note cursor, which turns the cursor off, and if you want to make a blinking cursor, you need to use these two functions together with a delay in between. So once we upload it to the board, you’ll see that we have a blinking cursor, since we didn’t specify the location in the cursor. It ends up at the next available character after any text, that’s printed to the screen. So since we have our hello world text ID printed, the next available character after hello world, so we can use this code here to place it directly below the exclamation point in hello world.

So there’s our LCD set cursor at position 12 comma 1, which sets the position of the cursor there’s. Our LCD cursor function, which turns the cursor on there’s, our delay of 500 milliseconds, and then our LCD set cursor at position, 12, comma, 1, again and LCD. Not no cursor turning the cursor off with another delay of 500 milliseconds msl loops back up to the top of the void loop section. So let’s have a look at what this does all right. Well, there’s our blinking cursor right below the exclamation point at the 12th character position on the second row, so we can also make a block style cursor. Instead of the underline cursor and with the block style cursor, we don’t need to do any delay or cursor on cursor off. All we have to do is use LCD blank and automatically blinks I’ll show you what that does here. So the next function is LCD display LCD dot display, along with LCD, no display, will turn on or off any text or cursors that are printed to the screen. So up in the void setup section we have our LCD print hello world. Then, in the void loop section we have LCD display, followed by a 500 millisecond delay. Then LCD no display followed by another 500 millisecond delay and you can change the time that the text is on or off by changing the time delay. All right now, let’s start moving some text with the LCD scroll display left function.

We can shift any text printed to the screen to the left. It needs to be used in the void loop section, so you can see here. We have our LCD will display left in the void loop section and the delay is the amount of time that each character is shifted, so it’ll shift one character per second or 1000 milliseconds to the left. So our hello world text is shifting to the left at the rate of one character per second and after 40 characters. It will loop back around to the beginning, so you can fit up to 40 characters before it will start printing to the line below. So now, if we use the LCD will display left function with the longer text, string, I’ll show you what happens it doesn’t right over the hello world. It actually prints to the next line after the 40th character, so I’ll go ahead and add a bunch of different letters and numbers here make sure we’re over 40 characters in length now there’s our hello world, and you see the letter below that that’s, our that’s, the 41St character, so if you have a text string longer than 40 characters, it’s going to end up printing to the second round after the 40th character. All right, the LCD, auto scroll function, takes a text string and shifts it to the left or right. In increments of the length of the text string, so here we’re going to print ABC, we have our LCD set cursor function, which sets the position of the cursor, the LCD, auto scroll function and LCD dot print ABC with a delay of 500 milliseconds.

But I have a link to a special calculator in the blog post, where you can go and basically draw whatever character. You want and it’ll give you this block of code up here and you can just insert it into your program and it will print out right now, I’m going to make a degree symbol, and it looks just like that it’s a little circle. Now. Some of these functions might not seem very interesting at first glance, but I think they’re, real power comes in combining the functions and basically experimenting and being creative. So I hope you had fun with that and definitely leave a comment in this comment section. If you have any questions and definitely share it, if you found it useful, I think other people probably find it useful too. So all right hope you have a good day and I’ll talk to you later. 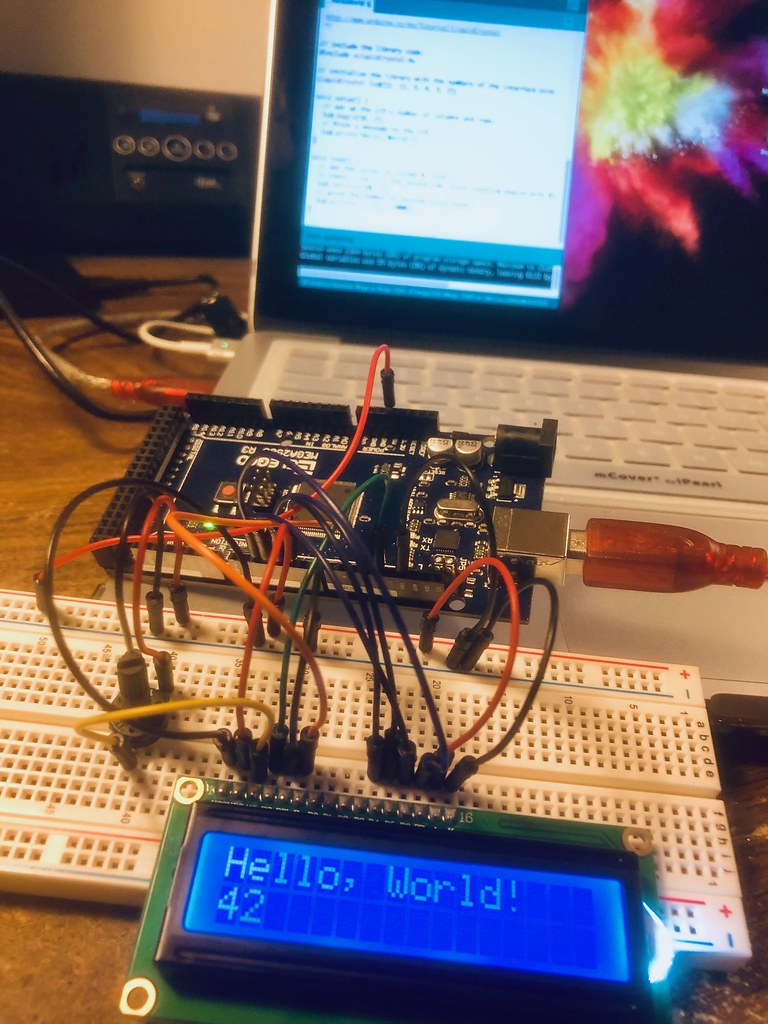 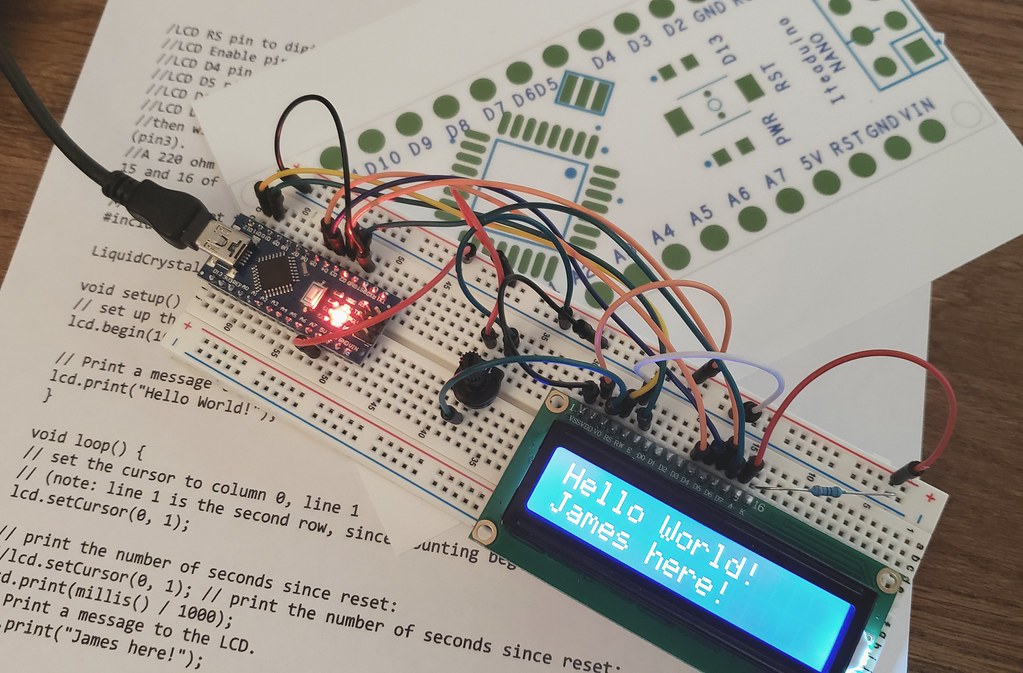